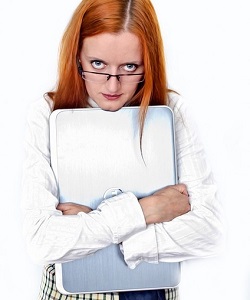 Have you ever tried throwing in a few big words during a job interview or meeting in the hopes that it would make you seem smarter?

If you were lucky, your imaginative use of synonyms got you the job or earned you the respect of your coworkers.

But it’s more likely that you were left feeling slightly foolish and have since banished words like verisimilitude or pusillanimous from your everyday vocabulary.

So why is this?

Contrary to the popular notion that using bigger words can make us sound smarter, research shows that the more effort we put into looking smart, the less intelligent we’ll actually appear to those around us.

In one study led by Nora A. Murphy, associate professor of psychology at Loyala Marymount University in Los Angeles, a group of graduate students was told to try to appear intelligent during videotaped discussions, while a second group was given no specific instructions about how to act. Each student also took an IQ test beforehand.

These recordings were then shown to other graduate students, who were asked to estimate the subjects’ IQ based on their behavior in the videos.

They soon found that it was easier for the students to accurately estimate the IQs, including the lower ones, of those who tried to make themselves appear more intelligent by using bigger words, putting on a serious face or avoiding nervous habits like touching face or hair.

The researchers explain that this is because when we try to appear smarter, we risk exposing what we don’t know, and the harder we try, the more obvious it will become to others that we’re trying.

Ditch Flowery Language in Writing Too

The same principle seems to apply to our writing, and a study led by Daniel Oppenheimer, professor of marketing and psychology at UCLA Anderson, found that as the grandiosity and complexity of a person’s writing increases, people’s estimation of their intelligence decreases.

Or to put it simply, fancy words make you seem less intelligent.

Oppenheimer concluded this after 71 students evaluated a number of writing samples. Some had been modified to use needlessly flowery words rather than simple ones, while others were presented in plain, simple language.

He found that the students tended to rate the intelligence of authors who wrote the essays using simpler language as higher than those who used complex language.

Of course, Oppenheimer also notes that there’s nothing wrong with using long or complicated words if they help you get your point across. But using them needlessly in an attempt to look smarter will actually lower readers’ evaluations of both the text and its author.

So when it comes to your resume or cover letter, using unnecessarily fancy terms or flowery language to dress up your experience will only serve to cast doubt on whether you’re really as knowledgeable as you claim to be.

What You Can Do

So is there any way in which we can boost people’s perceptions of our intelligence?

One thing that the researchers in the first study noticed is that certain characteristics have a positive impact on someone’s first impression, which can lead them to make a more positive evaluation of that person’s overall intelligence.

For instance, the students rated people who appeared to be more relaxed, confident and engaged in the conversation as smarter than those who were focused on their facial expressions or vocabulary.

So even though you can’t fake intelligence, showing confidence, giving thoughtful responses rather than blurting out answers immediately, and looking at others when speaking to them are all ways in which you can demonstrate to employers that you’re a capable candidate.

If you often feel nervous during job interviews, make a point of speaking slowly so you don’t rush yourself. Taking a deep breath before you speak also gives you a minute to think about your answer and will help you feel more relaxed.

Most importantly, though, remember that the best way to stay calm and composed during a job interview is to show up fully prepared. It’s kind of like going into an exam; if you’ve studied and done your research beforehand, you’ll get better results.

By Marianne Stenger | Website | Other Articles
Marianne Stenger is a writer with Open Colleges, one of Australia’s leading online education providers. She covers everything from career development to learning tips and the latest research in education. You can connect with her on Google+ and Twitter, or find her latest articles here.