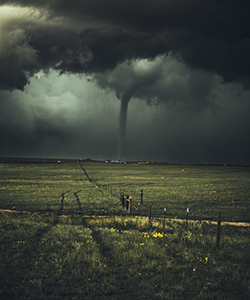 Many scientists agree, the strength of these storms or natural disasters is being increased and exacerbated by the changes to our climate. These disasters of Mother Nature are not the only things reeking havoc on the environment. Man-made problems like pollution, contamination, or even just wrecking land from overuse are also a contributor to the scarring of our landscape. Regardless of why or how these things happen, what do we do when they do happen is key. Because they are going to happen, and our response can make a world of difference when the next one comes.

That disasters are going to happen has become a truism for land managers everywhere. people from the US Forest Service all the way down to single homeowners have questions about what to do when a disaster strikes. These questions have become all the more poignant in an environment that increasingly becomes ravaged both by man-made causes and natural ones. Mother Nature and industrial pollution are attacking the landscape from all sides. We only have to go back a short time from this article’s writing to remember the Camp Fire that torched thousands of homes, killed dozens of people, and torched hundreds of square miles of land in California. What do you do in the aftermath of a disaster like that?

One thing that has to be done when an entire ecosystem goes up in flames is working to replant. Ecological replanting is of utmost importance – while the fire itself was awful, it allows for an opportunity to replant in a better way, using ecological replanting pioneered by people like Granite Seed Company. When a disaster of this scale happens, it can take a long time for natural growth to get things put back together in the shattered ecosystem. It is of absolute importance that those who work to regrow the areas decimated by disaster use native plants and trees, so that the ecosystem damaged by it can regrow in a careful way. Unscrupulous developers can’t be allowed to homogenize the natural environment damaged, which could make the next disaster even worse.

On a national scale, it isn’t that difficult to take small steps to make offices and other places better for the environment. After all, most small steps are indeed small ones, and not all disasters are natural ones. Over-development has badly weakened the coasts, for example, and now coastal towns all along the Atlantic and Gulf coasts are facing down rising sea levels and dangerous floods that threaten not only seaside businesses, but residential structures and all who live there. Using natural, native plants are part of an ongoing plan that must be applied to put in protection for these places.

Like was stated earlier, climate change has exacerbated the disasters that have wracked not just our country but the whole world. The Camp Fire was only one of many fires that course up and down the west coast every single year. Not only that, but we have dozens of towns where rising waters threaten to be the death of them. At the rate things are going, huge numbers of our coastal residents will have their current homes bathed in ocean water within a matter of decades. This presents a massive ecological crisis. While things like the Camp Fire can have good stories that come from them, the fact is that we are looking for silver linings on some very dark clouds indeed.

It’s clear that there is no easy solution to these disasters, whether they come at the hands of Mother Nature or at the hands of our own hubris. Since we are going to have them – the question becomes how to deal with the aftermath. Replanting in the wake of disasters, to lessen the impact of future ones is something that should be key.