Advertise Here
Skip to content
Displaying All Posts from August, 2014

4 Ways to Deal with Criticism

As freelancers, we get up close and personal with new acquaintances very quickly.

We go from cordially greeting a businessperson and exchanging pleasantries to sending that person the work for which they’ve hired us in a dizzying space of time.

Whether we’re designing graphics, preparing spreadsheets, writing copy, whatever our bag, we discuss the results a client wants and get to work.

After we’ve put things together and sent them off, we may find that a variation on one of the following ensue: END_OF_DOCUMENT_TOKEN_TO_BE_REPLACED

Worry is a very bad habit that keeps us trapped in anticipation, fearing that bad things may happen and expecting the worst.

It is more than an aggravating tendency, it is a waste of good energy that could be put into more productive pursuits.

The great American philanthropist Dale Carnegie pointed out that worrying was a time-wasting exercise. He asked people to consider the following questions.

“Do you remember the things you were worrying about a year ago? How did they work out? Didn’t you waste a lot of fruitless energy on account of most of them? Didn’t most of them turn out all right after all?” END_OF_DOCUMENT_TOKEN_TO_BE_REPLACED

We can agree it’s important to keep up on the current state of one’s industry. It’s key to look beyond the computer screen from time to time. That could mean learning the latest trends in content marketing, outsourcing or graphic design. It could be checking in with the role of working at home in the global economy or the future of contract work as we know it. Everything is changing and it’s essential to know what to expect. Even if you have a favorite freelancing trade journal you faithfully read — in print or electronically — here are a few recent books you may wish to devour. END_OF_DOCUMENT_TOKEN_TO_BE_REPLACED 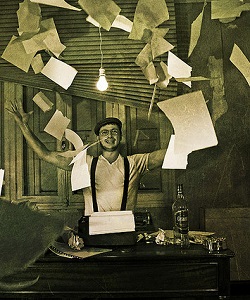 One of the main qualities of a good freelance writer is their ability to not only write well but to write quickly.

This is especially true if you are at the beginning of your writing career. You must learn how to write faster because you need to write more; you are getting paid less.

And if you like eating three meals a day, and so does your dog, then you better learn to write faster before both of you are hungry — very hungry.

Here are a few tips to help you get started on becoming a faster writer. You and your dog can thank us for them later. END_OF_DOCUMENT_TOKEN_TO_BE_REPLACED

Decisions, decisions. Sometimes it feels like our lives are one big set of decisions strung together between meals and sleeping.

Maybe that’s because on average all of us are asked to make more than 100 small to medium decisions every day — just in our personal lives.

If you are a supervisor or manager, then you are likely being asked to make even more — often more important — decisions than that every working day.

It is no wonder therefore that so many of us have decision fatigue. It is characterized by a range of emotions and reactions including indifference and inertia. END_OF_DOCUMENT_TOKEN_TO_BE_REPLACED

Trends: Office of the Future

In the last 50 years there have been dramatic changes in how working space has been provided to employees.

Once, almost everybody who was somebody had an office and almost all of them had windows.

Eventually this was winnowed down to open space design and cubicles.

Now it appears we are ready and in some cases already experiencing an office-less working environment. END_OF_DOCUMENT_TOKEN_TO_BE_REPLACED

In the United States alone there about 100,000 MBAs being granted each year and another 250,000 students enrolled in MBA programs at any given time in that country. END_OF_DOCUMENT_TOKEN_TO_BE_REPLACED

There is now a lot of scientific evidence that we are not getting enough sleep and not only is that making us grumpy in the morning, it is costing the global economy billions of dollars in lost productivity.

In the United States, the Centers for Disease Control has estimated that about 30 percent of the American population doesn’t get enough sleep.

Researchers at Harvard University said that in 2011 this cost the American economy over $60 billion a year!

On an individual basis we know that we just aren’t at our best when we don’t sleep well and while we can get by for a while on little sleep, it can have a disastrous impact on our health and our work in the long term.