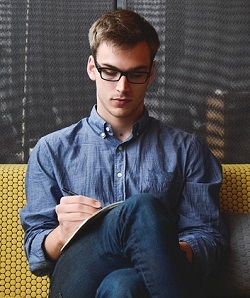 This is the best introduction I’ve ever written.

It doesn’t re-invent the wheel.

And because I’m telling you that these are the traits of a great intro paragraphs, it sets up the discussion.

I’m now ready to flesh out ways to write a great intro for a blog post or other web article.

Set Up the Discussion

This is pretty easy, so I won’t spend too much time on it. Just remember that the idea isn’t just to establish what the general subject of the article, but to let the reader know what you’ll say about it.

Here’s an intro to an article I wrote on Enzo Ferrari for a blog about entrepreneurs:

Enzo Ferrari’s career tells a simple and classic self-made man’s story. He had a product—more of an art, really — about which he was passionate, and he crafted it his whole life. He made a world-famous icon.

The article then explores the idea of chasing one passion throughout a lifetime and treating a product as a work of art.

In the intro to this article, I actually outlined the specific points that would make up the headings of each section. That can be good, but impractical if you have ten headings. Perhaps you can group some of them into larger categories, or, in that case, forget about the outline route.

You may not have expected this article to begin with a cocky proclamation from its author. Maybe you expected, “An introduction is very important …” or, “Have you ever read an article with a really great introduction?” Those are wastes of space.

A cliché in writing is that you should draw the reader in. The problem with that is the reader is going to be drawn in more by the headline and subheading of the article and perhaps with the main picture that went with it.

But being surprising can be a way to at least make the reader a little curious. If you can do that and simultaneously let the reader know that the article is, in fact, discussing what the title promised in a way that is useful, you’re well on your way.

Be Concise & Don’t Reinvent the Wheel

Asking the reader if she has ever read an article with a good intro doesn’t really get anywhere. It’s kind of like approaching someone to ask him or her on a date, being nervous, and talking about the weather or some other obvious item just to say something.

We don’t need four sentences merely telling us this:

There are a lot of cars in the world and that they are all made by someone. Enzo Ferrari was one of the people who did this. Making cars is an example of entrepreneurship, the goal of which is to make money. Ferrari sure made a lot of it.

All too many introductions are made up almost entirely of things everyone already knows. If that’s what a reader sees, what will the rest of the article be made up of?

So, now that you’re not reinventing Ferrari’s wheel, it’s also important to be concise. An intro should be just that. It may be two paragraphs or the classic solo graph.

You don’t have to be what J.D. Salinger would call a “word squeezer,” but the reader has a sense of what you’re talking about from the headline — let him or her know the parameters of your discussion and then launch into it — leave the details for the body of the article.

What tips do you have for writing a good introduction? Tell us in the comments.