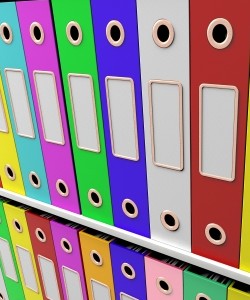 A few years ago I landed a job working for the writer-directors of a movie. They were young, laid back, creative guys, and tended to be a bit messy and disorganized with their own office and work. As a consequence, I modeled myself after them and let my own workspace overflow with — well, let’s just call it inspiration.

Instead of filing things away and keeping my area clean and shiny, I had piles of artwork and paperwork stacked on the desk, under the desk, in boxes. At first it was because I was genuinely too busy to get to it, and I’d come into the position in the middle of production, with lots of work already there that I had nothing to do with. Later, I rationalized that I more or less knew where things were and that having everything out meant that it was easier to access. Yeah, not so much.

Most of the time when they asked me for something it wasn’t needed immediately, so I could just head back to my area, dig around for a while, and figure out where it was hiding. It worked beautifully — until the day when both my bosses appeared at my cubicle, frantic, needing a document immediately for a meeting. In fact, it was so immediate that they stood there and watched while I bumbled around opening boxes and rifling through piles, not even able to come up with a good excuse because I was so discombobulated.

Luckily, I found what they needed in time, and they ripped it out of my hand to race to their meeting. But I was equal parts angry and terrified. I knew I’d failed them, and I wasn’t sure what to do until the assistant in the next cubicle came over and just took a stack of paperwork and started organizing it. By the time my bosses returned, my workspace was pristine and everything was filed neatly and clearly. Before they could say anything, I apologized, said it wouldn’t happen again, then proceeded to demonstrate where everything was.

I’m pretty sure they stopped listening about ten words in to what I was saying, but I didn’t get into any trouble, and all of us came to appreciate the new organizational system as the production went on. And because I now actually knew where things were, I no longer stuttered, fibbed, and flubbed when they asked me for something, which made our interactions better, too.

What Can An Organized Office Do for You

As cool as I thought I was being emulating my bosses’ messy behavior, all it really did was cause me undue stress and anxiety whenever they asked me for something and I had to pretend I knew where it was.

Teach you about the job.

Though this may not be true in every position, if you come into a job where there is already work to go through and file away, you can learn a lot by reading it while you do so. This will make you more confident and prepared when something comes up.

Frantically pawing through documents at the last second was more than just anxiety-inducing for me — it made me really frustrated because most of the time I felt like I was pretty darn good at my job, but in this one area, I knew I was failing miserably.

If you have to spend 20 minutes looking around every time someone asks you for something, you’re wasting your time and the time of your employers. Even if it takes a day or two to get thoroughly organized, the time you save over the long haul is worth it.

No one wants to be in constant fear when they talk to their boss — especially if getting your boss to like you seems vital to your future career prospects. Unfortunately, if you’re disorganized it’s far more likely that your bosses will think you’re spacy or dim or just plain socially awkward because your brain will be bouncing around trying to figure out what to do when they ask a question you can’t answer. Setting up physical rules and systems will help you to also set them up in your brain and organize your thoughts.

Messy, disorganized workplaces cause people to buy office supplies before they really need them and print documents out over and over because they believe they’ve been “lost.” Some of that is inevitable in a big company, but there’s still quite a bit of money that can be saved if you do your part to keep track of things. And if you’re wondering how this helps you (as opposed to your company’s bottom line), imagine how good you’ll look if you can prevent your boss from shelling out for more printer cartridges because you found several packed in the wrong box, or if you can keep them from replacing “lost” personal items that have just been misplaced.

The best part about an organized office is that even though it seems like a chore when you start out, most of the time you’ll realize how much better and easier life is to manage once you’ve done it — then all you have to do is maintain!

By Steven Boggs | Website | Other Articles
Steven Boggs is an award winning freelance writer with many years under his belt covering the best topics in the business and technology industries. When he’s not busy reviewing resources for small business owners, you can find Steven working on his goal of competing in a triathlon by year’s end.