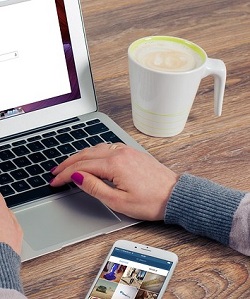 There is no denying that the typical office environment has changed over the last decade, with the majority of employees now sitting in front of a computer screen for long periods of time.

The once-seen boundary between work and life has become blurred, predominantly due to social media becoming increasingly utilized in business for marketing purposes.

For many employers, allowing for social media use in the workplace would be absurd.

And perhaps, this makes sense, as social media is widely understood to be time-consuming, mindless and useless.

It can be very tempting to check social media accounts while working, but unless you’re working in the social media or marketing field, it is very unlikely that interacting with followers is what you’re being paid to do.

But does banning social media boost productivity or hurt workplace morale? Here are four reasons to why social media should be allowed in the working environment.

1. You Are Losing Talent

The feeling of connectedness is vital in Generation Y, and overlooking this fact could adversely affect hiring and turnover rate.

Fifty-six percent of millennials say they won’t accept a job role unless social media is allowed at the workplace. As a result, social media plays a huge role in drawing new talent.

Employees from younger generations are accustomed to using social media on a regular basis. If you start banning social media, some employees may look for work elsewhere. This will result in the loss of good employees.

Social media is an important part of daily communication and identity and not just in the younger generation. About half of employees using social media at work are over the age of 35. Social media is now a regular part of human interaction, and denying this can be counterproductive.

2. You Are Decreasing Productivity

The biggest fear for employers is that social media will make employees less productive. However, these employers must remember it’s not the hours spent working on a project, it is the result of that work which counts. Always measure productivity by the end result.

A study produced by the University of Melbourne found those who regular surf the internet are more productive than those who don’t. Therefore, despite beliefs, social media has a place in the workplace.

Businesses realize that to maintain productivity, employees need to take small breaks in order to re-energize their minds. Social media and checking emails are forms of refreshing the mind.

Thirty-four percent of employees say they slack at work because they work too many hours. Social media can provide a much-needed mental break in the heat of a project.

Two hours on Facebook may be a huge problem, but a five-minute diversion is not a big deal. Employees simply cannot concentrate on working for eight hours straight. Short social media breaks may be necessary to keep employees at the top of their game.

3. You Are Establishing Mistrust

If an employee speaks poorly of your company on social media in working time, something must be done about it. However, banning social media in the workplace isn’t going to win the battle.

Whether an employee misrepresents your company on social media in or out of working hours, it is not the timing of the post which is the problem but rather the attitude of that employee.

Banning social media sends a message through the workplace that you don’t trust your employees. Responsible employees know they have a job to do, assignments to complete and a quality to achieve. Allowing employees to spend a few moments on social media will keep these employees engaged and performance levels up.

Create specific guidelines for on-the-clock usage to help avoid any social media disasters. You should introduce these guidelines to new employees on day one.

Productivity is all about balance. Banning employees from Facebook is like banning them from talking about football at work. Social media is a way to relax for a moment, away from the working situation at hand.

4. You Are Inhibiting Communication

Social media doesn’t break face-to-face communication in the office — it helps. One study found that three in five workers say social media has resulted in better relationships at work, and one in three have used social media in furthering work-related projects.

Like emails and instant messaging systems, social media is a casual way for employees to interact with acquaintances and build stronger relationships, resulting in an overall better workplace communication.

Empower employees with social media by putting a social media policy and monitoring tools in place to keep the business in line. Proper training to improve employee morale and to avoid social media disasters should be given to each employee.

Is social media use allowed in your office? Tell us about what you think!