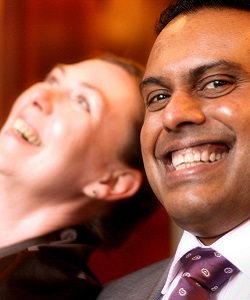 Here are the top six lessons from improv that can help advance your career:

This is one of the foundational rules of improv. In essence, to be able to react effectively to your scene partners, you have to be completely attentive to their words and actions.

So, as opposed to thinking about what you are going to say next or wondering what interesting tidbit your vibrating smartphone is tempting you to read, your task is to give the other person your full attention.

The benefits of this approach in interactions with colleagues are pretty obvious. By taking this lesson into the workplace and being intentional about staying present with your co-workers, they will feel more understood and valued.

In turn, this will encourage them to return the favor by being more attentive to you. Further, by staying present you will be able to gather more information, including concrete data like specific facts and more subtle information like nonverbal reactions and group dynamics.

When you are in the midst of performing a scene, things change. You might have been planning for the scene to go in one direction (perhaps you think you are a frat boy), when all of a sudden, it evolves into something else (you discover you are actually a toddler).

If you lament over what could have been instead of adapting quickly and being receptive to the other person’s perspective, you will miss out on the new possibilities for developing the scene.

In the workplace, you and your co-workers will likely approach some issues pretty differently (after all, you are different people). When you can honor your differences and roll with them, instead of wishing the other person was more like you, each person comes out of the interaction more satisfied.

And sometimes their way may be as good – or better – than yours! Also, by staying nimble, you can better react to new realities as they crop up.

My teacher stressed that it’s no fun for an audience to watch actors who aren’t getting along with one another. In fact, he suggested that if there was going to be a conflict, it had better be about something huge, because arguments and a lack of cooperation just aren’t funny in improv.

While obviously no relationship is conflict-free, making sure that any disagreements are about something worthwhile is an important lesson. Think about whether it is really worth it to get into an argument over daily hassles or taking someone’s bad mood personally.

By letting the petty things go and leaving the conflict for substantive issues, you will contribute to a more positive and productive work environment.

In improv, the more specific you can be about the location, the character and the situation you are in, the better it is for all involved.

So, for example, instead of saying “Hey, I’m enjoying sitting here with you,” it is better to say “Hey, Lolita, I’m really enjoying making this sand castle with you in Bali.” This provides the other actors with more information to react to and enables you to have greater influence over the direction of the scene.

At times, I think a lot of us are guilty of expecting other people to read our minds to figure out what we want. However, unless you work for a psychic hotline, this is unlikely to serve you very well!

By being specific about your desires and appropriately assertive in expressing your point of view, you can significantly reduce misunderstandings and grief in the workplace and perhaps become perceived a thought leader. And, shockingly, you may be more likely to actually get what you want!

5. Have an Attitude of Fun

Our teacher consistently told us that each of us were responsible for coming to class with an attitude of fun. It was no one’s responsibility but our own to entertain us. No excuses.

And, the funny thing was, when each of us came with the right attitude, it was as if it compounded exponentially, and it created an amazing space in which to create.

In the workplace, each person is responsible for his or her own happiness. Yes, leadership and the work culture are important, but ultimately you are responsible for how you respond to situations.

If across time, the environment proves not to be a good fit for you, you have the choice to find something that would be fulfilling for you. In the meantime, commit to bringing a positive attitude to the office.

Finally, in my improv class, we all came to the class with different talents — one classmate seemed like a Kristen Wiig in training with her total lack of self-consciousness, another had an incredible singing voice and ability to come up with rhymes in a heartbeat, while one seemingly mild-mannered guy was able to deliver the most hilarious deadpan comments with impeccable comic timing.

The times when our scenes were the absolute best (and the most fun) were those times when we purposely set each other up to be able to showcase our talents.

In your workplace, make a concerted effort to recognize each others’ talents and give each other the space to use them for the good of the team. People flourish when they are able to use their strengths, and the team will be able to achieve great things together when each person is at his or her best.

Even if you never set foot into a class, apply these improv foundations and watch your career soar!

(Photo by David Poole / CC BY)