How to Stop Your Internal Resistance to Change 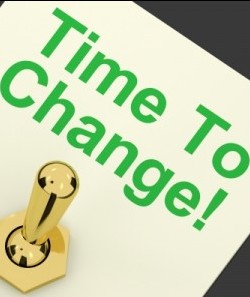 It was that new computer system at work. Everyone had been talking about it for a while and it also seemed that everyone had their opinion about it.

Management’s view was that this system was going to help every employee to do their work much faster and the general productivity level would increase. In addition, since certain tasks would be automatized, there would be less chance for human errors.

However, the employees weren’t that sure that this new system would help them much in their daily tasks. According to them, it would generate even more work, which would force the employees to work overtime. Besides, they were wondering why should they change the computer system in the first place, since the old one was working OK? Sure, it had it flaws, but people were comfortable when using the system, especially since they knew certain tricks to avoid all those well-known bugs.

Employees’ opinion was that it was better to stick with the old system instead of implementing the new one. And to make sure that the old system was going to be used, they were even willing to go on strike about it.

Although the workers were fighting to keep their old system, the true cause for the emotions was internal resistance: an unwillingness to change and to learn a new way of doing things.

The old way is better than a bag of new ones – or is it?
When you look at the scenario I just described, it’s easy to agree with the employees: They don’t want to work overtime and do things in a harder way than before.

However, there are deeper reasons for their resistance.

First, they are feeling too comfortable with the old style of working. If there are going to be any changes in their work environment, they threaten to shake their everyday work too much.

For instance, if they had to learn the new system they’d also have to step outside their comfort zones and that’s what they aren’t willing to do.

Another point behind the resistance is refusing to learn something new.

When a new computer is implemented, people need proper training as well. It also means that it takes time until people learn to use the technology properly. Some people may be afraid that they will be unable to learn the system, while others think that too much effort is needed to grasp the new concepts and ways of working.

Finally, it’s the outdated attitude that lives very strongly in this work community: Why implement a new method, when the old way of doing things is working well? This gives the employees another justification to complain even before using it.

The True Reasons Behind Resistance

If I take a look at my work life and the situations when I had to do things in a new way, I have also faced internal resistance towards the change. In my case, there was one core reason behind my behavior and it was fear.

First, I was afraid of the change in general. Since I wasn’t sure what the future would bring, I was unsure about myself and my capabilities of handling the change well enough.

Second, I wasn’t sure if I was would be able to learn the new stuff fast enough. In fact, I was comparing myself to others, thinking that other people would learn the ropes much quicker than me.

Third, my opinion was that the new way of doing things was going to make my life harder some way. This prejudice was caused by the rumors that were wildly floating around the office.

All I knew was that my work was going to change and not necessarily for the better.

How to Stop the fight with Resistance

When you hear about the coming change in your working habits, you should change your attitudes accordingly. Instead of considering a change as a threat, you should be more open towards it and its possible benefits in your daily work.

Understand that any change will require time. Getting to know a system well and implementing it in your work takes some effort, but it’s worth it.

However, once you have gone through the transition period, you’ll wonder what was so hard about the change in the first place! Also, you and your colleagues could create a support group for dealing with the change. This group can learn more about the coming change and then help each other out, if issues arise.

Making the transition from old to new is much easier with a group than by just doing it alone.

Steps for Dealing with Change in Your Workplace

Here is how to handle the change in your work place and make the transition as smooth as possible:

1. Attitude check. It’s our attitudes that make the change hard or easy for us. And why on Earth would you make the change harder than what it needs to be? That’s why you really need to figure out what is causing the resistance on your part and reconsider if there is alternative way to think about the situation.

Also, it’s worth remembering that with big changes in the workplace, everyone is affected – not just you. This has helped me to deal with change much better.

2. Reject the rumors. Shoot down the rumors as quickly as possible and refuse to hear them. When there is a change coming, there are also rumors floating around.

Unfortunately, these rumors aren’t necessarily the truth and it’s impossible to form an objective opinion based on that.

As soon as you do that, you’ll already see that certain rumors were certainly exaggerated or just wrong.

4. Give enough time. Many times learning a new skill takes time and in fact, the process is much longer than just testing a task. Also, testing something just once doesn’t really give you chance to form a valid opinion about it.

That’s why it’s important to give the system enough time to “sink in,” so that you can become more comfortable about it.

5. Be honest and give feedback. It’s important to be honest about the system and be willing to give feedback about it. Don’t hide the fact that you have difficulties using it.

The more open you are to a situation, the better your chances are that you will be able to get proper help.

If you feel that a certain functionality is not practical or working well, give constructive feedback about the matter to the management. In this way parts can be improved and developed to be more user friendly.

6. Ask feedback from others. Do you know others who are using the new product already? What are their experiences?

Asking others about real-world experiences may help you to form a more realistic opinion about the new technology.

7. Gather a support group. Form a group of people and decide to give support to each other if any issues arise.

This helps to deal with the change most likely in a positive manner, since everyone is helping each other to learn the new way of doing things.

Fear is the main reason for resistance when a change is coming. However, many times fears are unnecessary and the change can eventually turn out to be a positive one.
When a certain time period has passed, the new system will most likely feel natural, it’s now comfortable to use and its benefits are easier to see.

Over to you: Do you face internal resistance, when you should learn a new way to work? How do you overcome the resistance?

By Timo Kiander | Website | Twitter | Other Articles
Timo Kiander, a.k.a. Productive Superdad, teaches WAHD superdad productivity for work at home dads. If you want to get more productive in your own life, grab 222 of his best Tips for Becoming a Productivity Superstar.