How to Stop Wasting Time in Meetings 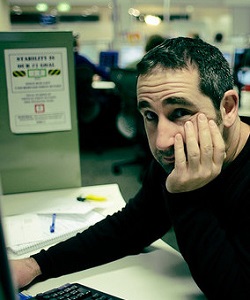 The first day of my first office job, my boss told me plainly, “There are two types of people in the business world. That guy who sets up all of the meetings and the rest of us, okay?”

He was no fan of wasting time, and it rubbed off on me in a big way. Spending countless hours in meetings — at least one per day at the height of my office career — is one of the driving reasons I moved away from working for others and started freelancing.

For the most part, fewer meetings have been a natural side effect of going into business for myself. My clients want to be bothered with unnecessary meetings every bit as little as I do.

It seems as we move further away from traditional employment — where you show up at an office every day to work for someone else — and into the mesh of remote workers dialing it in from all over, working with one another, the need for us all to have a conversation to review the email that was just sent out has dwindled.

Less time wasted means more time available for productivity. I can charge you less, because you’ll be using up less of my time. It’s simple math, really.

And so we begin to factor all of this into our freelancing rates.

Until, every now and then, one of them sneak back in. I find that they often hook you with a quick email to gauge your interest in a project, and once you’re in deep enough that a contract has been signed, they start dialing.

“Great, well let’s settle Items A through G here in the next hour, and then we’ll schedule something for Friday to review when we can setup a meeting to cover I through Z. Will that work for you?”

You start to see it happening. You get off of a conference call, and they ask you for a quick recap. All of which, you’re well aware, could have been summed up in a quick email.

How to Escape These Scenarios

Just because you’re being asked to hop onto a phone call every five minutes doesn’t necessarily mean you want to bail on the project. Plenty of great opportunities often come with annoying ticks that you just can’t seem to burn off no matter how hard you might try.

Refusing the meetings might not get you invited back to the table come the next project, or worse: booted from the current one.

Depending on your contract though, you may not be getting reimbursed for all of this chit chat and asking for more money so that you can talk on the phone with a project manager is not what I consider small talk.

So how can we avoid these situations? I’ve actually crafted a pretty straightforward solution that works 90 percent of the time.

How to Spot Chatty Clients

If you’d prefer to be spared the entire, sometimes awkward, process of letting a client down easy on the whole meeting break up routine, there are some tell-tale signs of how to discern needy clients right from the get-go.

Of course, you may love meetings. They may be an important part of the very large projects that you’re involved in, but for the rest of us, it’s nice to know there are a few tricks you can keep stashed up your sleeve.

(Photo by Steve Koukoulas / CC BY)

By Nathan Swartz | Website | Other Articles
Nathan Swartz left a great job with public broadcasting to pursue a freelancing career in web design and writing, which gave him the opportunity to travel the world and write about it.