From Minimum Wages to Millions 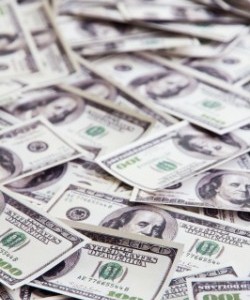 About a year ago, I was watching a television show that asked American multi-millionaires and billionaires how they became wealthy and climbed from minimum wages to millions.

I remember being fascinated by this one house; it was a mansion in every sense of the word and was decked out with just about everything a college student dreams about. So it was no surprise that the home belonged to the 29-year-old inventor of the Slanket, the predecessor, and rival, to the Snuggie.

While a freshman at the University of Maine, Slanket inventor Gary Clegg came up with the simple idea of cutting a hole in his blanket so he could use his remote, and adding a sleeve so his arm would stay warm.

By the age of 27, Clegg was picked up by both QVC and Skymall and only one year later Slanket revenue was passing the $4 million mark. I couldn’t help but wonder how that could happen, how someone could just come up with an idea and suddenly they’re rolling in king-sized beds of money. And how could I be one of those people?

The first part of the answer is that it doesn’t just happen. These men and women had to struggle through development and raising funds for creation and marketing just for starters before they ever saw their first real dollar. It takes a lot of dedication and belief in your product to get it off the ground.

The second part is a bit more ambiguous. It’s the ability to come up with something the world needs. The world might not know it yet, but if the inventor plays his or her cards right, in a short period of time people won’t know what they did without this amazing product.

Take Facebook as a prime example. Inventor Mark Zuckerberg came up with the idea for an interactive portal where users could share snippets about their daily lives and pictures with all of their other Facebook-using friends at once. Today, it’s almost impossible to imagine the modern world without it.

The third and final part of the answer, however, appears to be youth – or at least having a youthful mentality. The world’s multi-millionaires and billionaires are popping up at younger and younger ages. Zuckerberg was barely 20 years old when he received his first investment of $500,000, followed a year later by $12.7 million from Accel Partners in venture capital. Today he’s worth about $14.7 billion.

The technological and social modern world is currently one of the top points of human interest and it’s ripe for development. Those that can keep up and think ahead of the curve are the ones making the big bucks, and right now they are some of the youngest inventors that the world has seen in a long time.

Two of the young stars that recently caught the Facebook train to wealth are Instagram founders Kevin Systrom, 28, and Mike Krieger, 27. While it appears that these two ascended to social media fame in a very short period of time, the actual development of Instagram took years, with starts, stops and some rather odd ideas rising and falling along the way.

Once they settled on the concept, however, it was both a matter of perfecting the product and finding the funds to make it happen. Fortunately, Systrom already had connections from his former jobs at Google and a company that would later become Twitter, as well as a membership with the Mayfield Fellowship, a work-study program for young entrepreneurs.

By working the crowds, making connections, and fervently selling their well-developed concept, Systrom and Krieger were able to get the $250,000 investment that allowed them to launch Instagram. Two years later, the business sold for $1 billion to Facebook.

While it’s not entirely necessary, it does help to have good connections in technological and social media circles if you’re hoping to jump on the social media money train. If it hadn’t been for his side job of building databases for Eric Lefkofsky, a well-known industrialist, 31-year-old Andrew Mason might never have developed the platform that would one day become Groupon.

While working for Lefkofsky, Mason was given the means to develop a social outreach site that encouraged users to find ways to make the world a better place. Called “The Point,” Mason and his team regularly supervised the activity on the site and discussed new ways to improve on the platform.

One day, they noticed that a group was looking into how they could save money by purchasing items in bulk. The team began researching ways in which people could receive large discounts from companies for buying promoted items and the name soon changed from The Point to Groupon. Today, Mason, a former music major, is worth approximately $1 billion.

Useful business connections aside, some success stories have come from inventors who simply knew what the market needed and went for it. Gurbaksh Chahal was a 16-year-old high school dropout with an interest in online marketing. While researching the concept of advertising on websites, he hit on the idea of one-click advertising.

He soon launched his first company, ClickAgents, and after only two years sold it for $40 million. Driven by his success, Chahal immediately began working on his next company, an online advertising network called BlueLithium.

Three years after he opened the doors, Chahal sold the business for $300 million to Yahoo.com. Chahal, now 29 years old, is well into the development stages for his third ad networking company, RadiumOne, which focuses on the utilization of social media data.

For most of our history, successful businesses have been created over the course of a lifetime, but with the increasingly rapid spread of information and technology, savvy entrepreneurs are able to make a lifetime’s worth of money in a relatively short period of time.

But it’s not as easy as the few years to fame make it out to be. Becoming the next Mason or Chahal or Zuckerberg takes a driving passion, a willingness to not give up on your idea, the ability to develop it for today’s market, and the intuition to see the patterns of popularity and form it into the next great world-changing product.

How else can one climb from minimum wages to millions? Got more tips?