How to Be Liked & Respected at Work 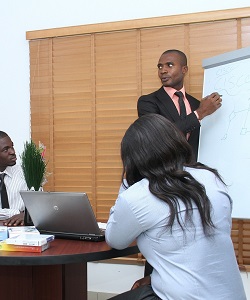 If you think that work is just about getting the job done well and within deadlines, you better think twice.

Working is not just about what you do, but also how you get it done — these two ingredients combined make up your reputation.

And by now you must realize that reputation counts a lot in every kind of professional environment.

You’ll get promoted not only on the basis of what you do, but also on how others perceive what you can do.

Your actions will be interpreted by everyone at your workplace, and at some point you’ll need to decide what sort of relationships you’d like to develop at work. Would you rather be liked or respected?

Here are a few tips to help you deal with this issue and build a solid reputation in your field.

Why It’s Not Worth It To Be Just Liked

It is better to be feared than loved if you cannot be both.”

This shapes our view of effective leadership. But perhaps greatness comes from being able to balance warmth and strength? And how does this sentence apply to regular employees who interact with their colleagues and supervisors?

Being liked or being perceived as nice seems innocent enough, but it does carry some downturns. Being nice, you’ll run the risk of being recognized as someone:

It’s simple — being liked at the workplace won’t help you to advance your career.

How to Avoid Being Too Nice

This is especially relevant to inexperienced female professionals. Women are brought up in environments that expect them to be nice girls, but sitting still and speaking only when spoken to later on won’t get them far in their careers.

Here are a few tips to help you avoid being too nice for your own good at the workplace:

Exuding warmth is important to create meaningful relationships with your colleagues, but remember that you’re at a workplace and usually those people aren’t meant to be your friends.

Set your eyes on your professional goal and push toward it with all your energy — being nice will only divert you from your mission.

Why Seek Out Respect?

Let’s examine for a moment what being respected really means at work. Respect generally evokes a positive feeling of deference or esteem for a person and their actions.

We respect people who are experts in their field and aren’t afraid to show (and share!) their expertise with others. Respect comes to those who get recognized for their work — that’s how they assert themselves to be heard and seen.

Being nice isn’t going to earn you respect. It takes a lot of work to gain the respect of people you work with, but the effort is definitely worth it. It’s what will make executives notice you and recommend you for promotion.

How To Be Respected

Here are a few tips to help you become respected at your workplace:

Both Liked and Respected?

This is a question that needs to be addressed. Some of you might wonder why professionals can’t be both these things. In fact, they can. Kare Anderson argues in Forbes that we can be liked and respected at the same time by striking the right balance between strength (the source of respect) and warmth (the source of personal likability).

But can you imagine what effort it takes to maintain this balance and in the meantime preparing yourself for the pendulum effect that is inevitable?

We also need to examine the issue with gender in mind. It’s clear being perceived as a person who does their job well comes from a different place in case of men and women. When it comes to that delicate balance between likability and respect, it’s exactly the same.

Being liked and respected seems like a real possibility for men, but not so much for women. As expected, female professionals will need to work much harder on maintaining this balance or they’ll be forced to choose one option over the other. From what we’ve seen so far from women in executive positions, they’re more likely to pick respect rather than likability.

When thinking about career development, you should always take reputation into account. Ask yourself the following questions:

Those are questions you should be asking yourself from time to time. It’s the best way to ensure that you’re on the right track to becoming the kind of professional persona you wish to be.

(Photo by Ibrahim Adabara / CC BY)

By Torri Myler | Website | Other Articles
Torri Myler is part of the team at www.bankopening.co.uk -- a UK bank branches opening and closing times repository. She is very much interested in the initiatives that aim at enhancing work environment that she combines with her passion for human resources.